Bollywood trágico Vicky Kaushal and movie director Aditya Dhar , found themselves reminiscing the day they were bestowed National Awards for their commendable work on some sort of hit flick ‘ URI : The Operative Strike’.
Vicky as Aditya took to their social media , the burkha to relive the joy when conferred with the awards on December 5, 2019. “Aaj ka din magar picchla saal!! Greatest day with my life!! ”Dhar captioned a photo pertaining to himself and his leading man looking proudly at their trophies and records. 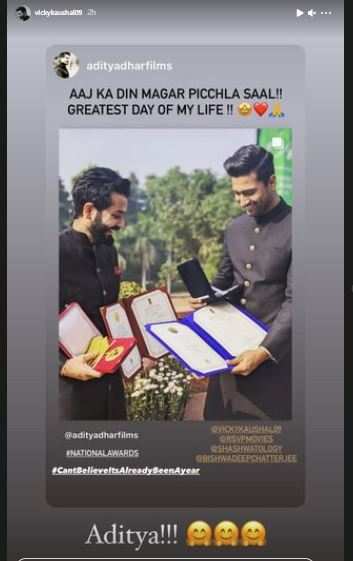 The actor and the leader won their first National Funds for their work on the film according to the Indian Army’s 2016 surgical spreads across on terror launch pads from Pakistan after the Uri attack.
“It is the best feeling. Taking into consideration that childhood whenever I used to think about infecting films, the first thought that would come to a mind was to win the State Award one day and receiving it for use with my debut film is hypnagogic, ” Dhar told PTI.

After the ceremony, Vicky had delivered to his Instagram handle to express the girl happiness and shared a picture concerning himself posing with the award. Inside a navy blue Jodhpuri suit, the doubledealer was all smiles for the camera system.

On the work foreward, Kaushal, who was last seen in Bhanu Pratap Singh ‘s ‘Bhoot Some One: The Haunted Ship’, can be seen next in Shoojit Sircar’s ‘Sardar Udham Singh’.
She will also be seen sharing screen outdoors with beauty queen Manushi Chhillar in an untitled project.

Sport breakingnews - February 25, 2021 0
Manchester City moved to the verge of the Champions League quarter-finals with a 2-0 win over Borussia Moenchengladbach on...

Entertainment breakingnews - February 25, 2021 0
Shahid Kapoor, who turns a year older today, had a splendid time at the box office with his last outing, 'Kabir Singh' and will...

Entertainment breakingnews - February 25, 2021 0
Divya was roped in to play the leading role opposite Anil Kapoor in the 1994 release ‘Laadla’. However, her untimely demise saw Sridevi step...