It’s a wrap for 2020 in the next few days. What a year 2020 has been! Not just for Bollywood but for the entire world. For an industry that relies heavily on the economics of selling movie tickets to an audience, this year was a total game-changer. Theatres went under lockdown while OTT platforms flourished. Producers, actors and other talent from the industry had to revisit and reinvent their strategies. It was not so much about making it big but actually surviving the pandemic.
The cinemas may have opened on October 15 but 65 days down the line industry experts are predicting that the light at the end of the tunnel is yet to be seen. The hope for 2021 rests on heavyweight titles like Salman Khan’s ‘Radhe’, Ranveer Singh’s ‘83 and Rohit Shetty’s ‘Sooryavanshi’. Is there light at the end of this dark tunnel? In this weeks #BigStory we speak to industry experts who share the lessons learnt in 2020 and their prediction for 2021.
Wait and watch
Bet you didn’t know that Reliance Entertainment which is spearheading the Ranveer Singh-led ’83’ and the Akshay Kumar-led ‘Sooryavanshi’ is waiting for ‘Wonder Woman’ to hit theatres. As you know, both Reliance films had been further pushed after the theatres opened to a cold response. The company now strongly believes that ‘Wonder Woman’ is a massy film and its fate at the ticket windows will be some yardstick for them to judge when they should go ahead with their two extravaganzas. ‘Saina‘ has been held back- treading stealthily

Another producer that has stopped in its tracks is T-Series. ETimes has it that the production house was on the verge of announcing the Saina Nehwal biopic ‘Saina’ (essayed by Parineeti Chopra) for a January 22 release but went back on its decision after scanning the poor box-office that the Kiara Advani starrer ‘Indoo Ki Jawani‘ generated. 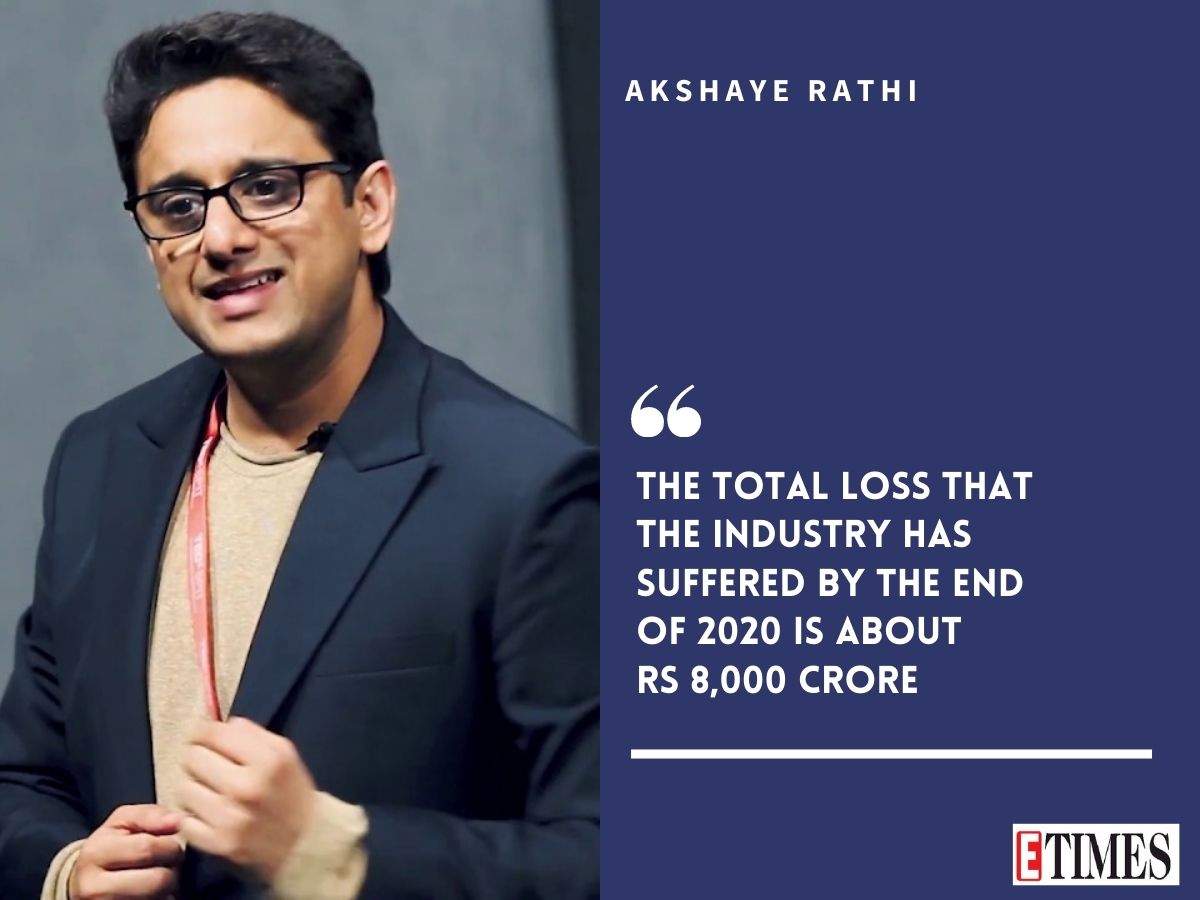 It wasn’t a case of ‘Well begun is half done’ which was a desperate need of the hour. The shutters went up to accommodate ‘Suraj Pe Mangal Bhari’. “But ‘SPMB’ tanked- nobody knew it was releasing, there was no buzz created, no sufficient announcements made. ‘Indoo Ki Jawaani’ which followed was nothing to shout about, it was for neither the young nor the old,” says Nahata, adding, “The malls and restaurants may be experiencing a decent number of visitors but that’s not going to happen in theatres so easily. You walk out of a mall/theatre in 30-45 minutes. A theatre is a commitment for 150 minutes at least. Surely, nobody is going to walk out from a film in 30 minutes; he/she might as well not go instead.” Another trade analyst Taran Adarsh says, “Restaurants and malls are at least offering something. What has the cinema offered so far in its restart? ‘Suraj Pe Mangal Bhari’ was a weak film and the reports of ‘Indoo Ki Jawani’ were far from encouraging. Such films wouldn’t have run even if COVID-19 hadn’t struck.” 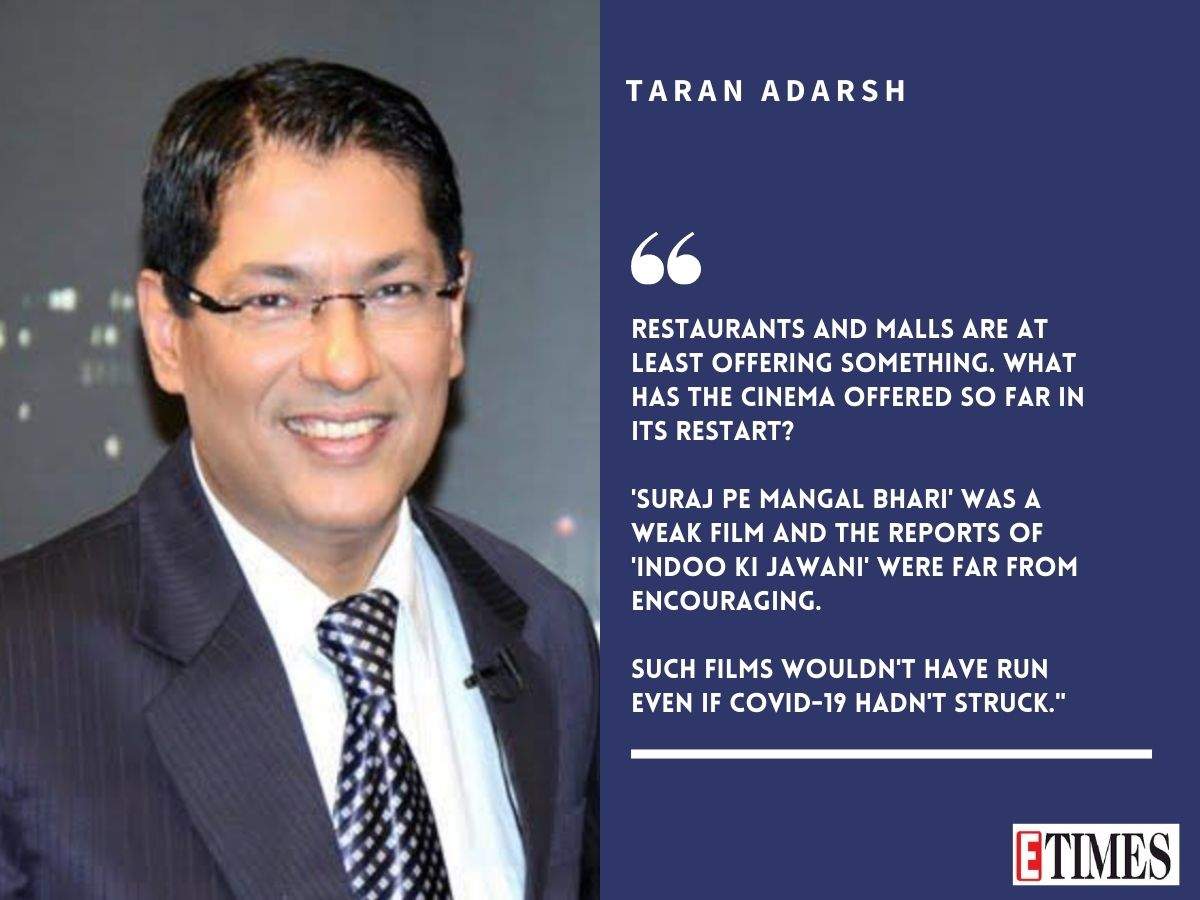 The million dollar question is: Will the biggies notch up numbers as high as before?

Goes without saying that the need of the hour is a COVID-19 vaccine. But leading distributor Ramesh Sippy cuts in, “Even then, it remains to be seen how close will the new normal be to the old one? Will biggies notch up the dramatic collections of 200-300 crore?” Reliance CEO Shibasish Sarkar endorses Sippy’s fears. “You are not going to get the numbers of ‘Baahubali’ or ‘Sanju’ for some time at least. You can’t hold those benchmarks for now; it would be too ambitious to think in that manner. The numbers of my films and other biggies round the corner as well will be impacted. I don’t expect the same number of footfalls in my films now, which they would have otherwise registered. Going to cinemas is not bread and butter, it will be the last in priority list as long as COVID is lurking round the corner. I am not saying that the good, old days will not return but it will take 6-12 months beyond vaccination to reach that point.” 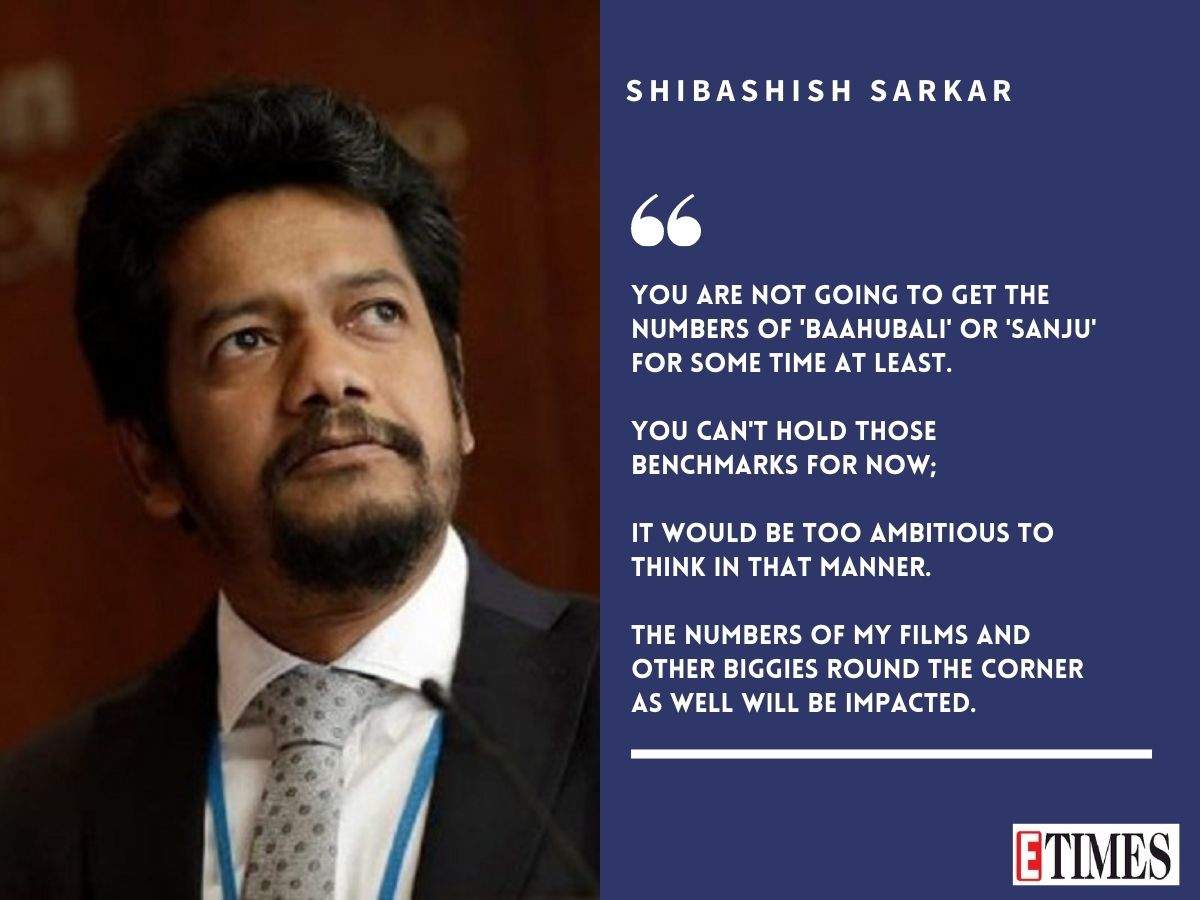 But Sarkar elaborates on the flip side as well. “A lot of development work has happened in almost all production houses in the lockdown period. Writers have got a good amount of time to pen their thoughts and scripts. And this is not just for cinema content but OTT content as well. Mind you, this will not backfire on cinema. OTT content is a separate entity now. So, what I am saying is that films will be made for digital platforms. Let me put it this way: There is a new child in the family. And, one child will not get preferential treatment over the other. Hollywood is proof. The OTT content abroad has increased many fold in the last 2 years but alongside, the revenue from movies has also shot up. The same happened in India if you take 2018 and 2019 into consideration, and think of it, weren’t these the two years when India welcomed its new baby?”

Adarsh also offers an upside, saying, “Filmmakers must have watched a lot of OTT content and Hollywood films during lockdown which they otherwise don’t get time to see. In this respect, you can expect better quality from them in days to come.”

God has punished us enough


Hope is virtually a source of income

So, has the movie business changed irreversibly? Producer at T-Series, Vinod Bhanushali says, “Not at all. Film business will return to the days of old and I have no doubt about that. Take for example, our film ‘Sania’ (directed by Amol Gupte). A movie-goer wants to hear the smash when the racket connects with the shuttlecock, he/she wants to hear the sound that Parineeti exudes when she goes all guns blazing in the court. Watching a movie in a cinema hall makes the adrenaline flow. I cannot enjoy new films at home, despite having a home theatre.” Senior actress Neena Gupta too is optimistic. “God has punished us enough. I don’t know about the vaccine but things will return to normalcy in film circuits in the next 4-5 months. New habits of watching online content are not going to dissuade the public from going to the theatres eventually; the simple reason being that people love to go out and it is necessary to go out as well.” Shakti Kapoor says, “Vaccine ke baad, people will go back to theatres with vengeance.” Adarsh returns to say, ” ‘Tanhaji’ did well, ‘Baaghi 3‘ was cut short in its run. That was all we can count in 2020. All eyes on 2021. We are in ICU but ‘Radhe’, ‘Lal Singh Chaddha’, ‘Prithviraj‘, ‘Sooryavanshi’ and ’83’ should oxygenate us.” 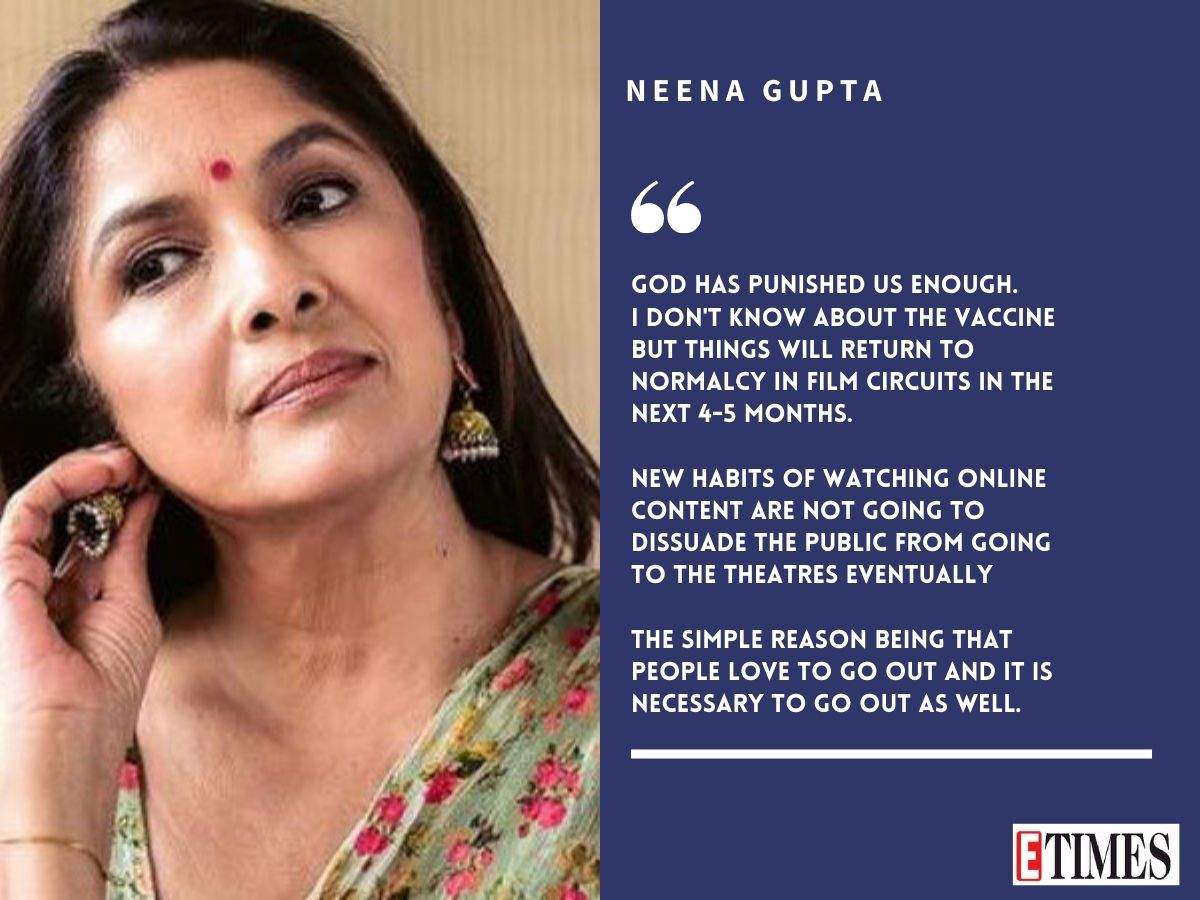 The Big Fight between Producers & Exhibitors

But Nahata again goes on the back foot when he reveals, “The industry is up in arms. Now, several producers are demanding a larger share from the revenue earned by the exhibitors. Whether this is right or wrong is a matter of a never-ending debate. These producers are arguing with the exhibitors that they didn’t give their products to OTT and waited for them. On the other side of the fence, exhibitors’ stance is that there is no guarantee in the improvement of attendance in near future.”

As the clock strikes 12 on December 31, the industry can pray and hope that as it enters 2021 there is respite for everyone not just stars and producers. There are millions of families that depend on Bollywood for their survival- from the spot-boy to a daily wage earning background dancer, everyone’s livelihood is at stake. Here’s hoping that 2021 will write a new #BigStory for the industry.